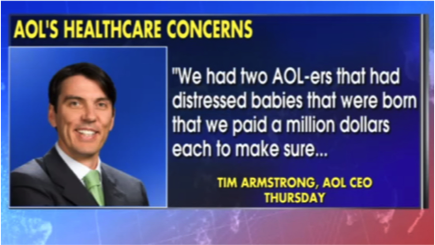 When AOL President and CEO Tim Armstrong told a town hall meeting that a couple of AOL’ers had spent $1 million each for distressed babies the social media and AOL staff went off the charts.  And while calling out the 2 AOL employees publically should not have been aired; what’s lost is that Tim Armstrong was simply explaining the reasons why changes in 401k needed to be made.  It’s the very same reason that insurers will have difficulty with the ACA.  It’s group insurance 101.  The whole group contributes to the various products whether they themselves utilize these products or not.  The reason is simple, to spread the cost.  What AOL realized is that 2 babies needed specialized care in an in-patient ICU setting which cost the plan millions. The issue has nothing to do with the value of those lives. Can you put a dollar value on any human life?  Human life is priceless.  The insurance to pay for the care and technology needed to sustain those lives is costly.

The real story is not that Tim Armstrong violated the privacy of two employees by knowing the specifics of their healthcare spending, but that this very scenario is what has the insurance community shaking in its boots and why it’s so very important that younger healthy people sign up for the so called Obama care.

The pool of money generated by subscribers to insurance policies is the pool that will be used to pay out claims.  Once that pool is exhausted, the insurance carrier has no choice but to raise rates and/or raise deductibles and co-pays.  Sticker shock among those who are buying insurance for the first time merely spreads the cost of paying claims among a smaller than expected pool of people buying the insurance.

Even if the federal government supplements losses, where does the money come from?  While the media is eating up the attention and crying foul at AOL; the insurance industry understands exactly what has happened and knows full well that the attention is on only one of the issues.  Is privacy a legitimate issue?  Of course it is.  But if companies continue to have to pay a large percentage of the payout pool for only a couple of patients that pool will dry up and other sources of revenue must be sought or cuts must be made.

Some may say this is an over-simplification of the issue. Really?  While the protectors of the right to privacy have their day the real issue of how to fund an aging population or a population that now has the technology to keep babies alive and thriving like never before goes unanswered.  And the cost of healthcare goes higher as doctors are derided for making too much money.  The facts of how insurance actually works and how that working affects the cost of insurance is not sexy enough to make prime time news.  But when Medicare becomes unsustainable, the media will explode with finger pointing and blaming when what’s really going on has been predicted for years; too many baby boomers needing care and not enough payers into Medicare to cover the costs.