mHealth and its Future in Healthcare

mHealth – the abbreviated term for mobile health defined as the integration of healthcare and mobile devices – has been a long-term, background topic of the healthcare technology debate. Recently, this topic has risen on the priority list resulting in curiosity regarding the future of mHealth in healthcare. The question raised by many: Will 2015 be the year mHealth takes off?

So why the debate? I’ve decide to take a different approach to review this point. Having gained over 30 pounds since getting married and my beautiful daughter’s birth, I have strolled many avenues, including mobile apps, to assist with weight loss. Unfortunately, like many of you out there, after two or three weeks of using my mobile apps, I gave up. Let’s face it, who has time to enter all the things you eat into an app? After some research, I found I am not alone. Over eighty (80%) percent of people said they downloaded an app to help them lose weight and quit using it within 2 weeks. This would lead one to believe there is obviously no market for health apps, right? Hence the beginning of the debate. 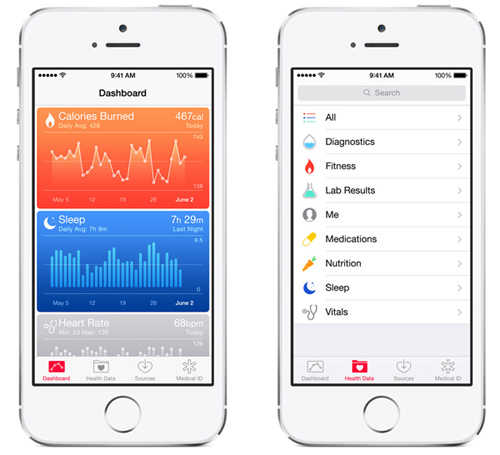 As an iPhone user, I recently updated to the new iOS 8; new improvements in the wake of the newest hardware release. As I looked through the tips and introduction, I was introduced to the new Health App:

“The new Health app gives you an easy‑to‑read dashboard of your health and ﬁtness data. And we’ve created a new tool for developers called HealthKit, which allows all the incredible health and ﬁtness apps to work together, and work harder, for you. It just might be the beginning of a health revolution. -Apple Website”

Apparently Apple joined with Mayo Clinic and Epic to develop this new app that has the potential to bring all fitness apps together; I’m sure this is only the beginning. Many technology gurus are now pushing their versions of a health app including “wearables” that communicate directly with the owner’s smartphone. These wearables are designed

to monitor the wearer’s vital signs and transmit the data to their phone. Genius! Could this new interactive hardware and deployment of the Health App to all iPhone users be the catalyst to push mHealth to the forefront of the healthcare news?

Through my research I have found one of the biggest obstacles related to mHealth is public opinion that healthcare should be personal. More specifically, it is believed when technology is involved, the personal touch is lost; however, with the busy lives of society today, mHealth may be the answer to more efficient care, providing the patient with other options that better fit their needs. Mayo Clinic and Epic clearly see the value of mHealth in the future of healthcare. If wearing a device that communicates with your smartphone and passes that information along to your provider is available, it could be argued that better, more efficient, patient participative monitoring promotes improved health. A study released in Forbes magazine recently indicated trends that put the wearables market close to $12 Billion by 2018 to which sixty (60%) percent is associated with health tracking.

Conversely, the difficulty level with developing apps and devices is much greater than that of a messaging system or sharing app like Instagram, Facebook, etc. This coupled with the fast pace of technology growth creates an even greater challenge for mHealth to be successful. As soon as the next big thing is released, it’s time for advertisement of the “next” next big thing. What could make this new trend different?

mHealth and its future in healthcare is not just about having a place to store a bunch of data or about seeing medical records and lab results. It is about patient generated data and the analysis of that data. Statistically, smartphone users check their phones over 150 times a day. If, during these phone checks, some kind of personal health analysis was available, it may just motivate the user and keep us all engaged.

What are your thoughts about mHealth and its future in healthcare?