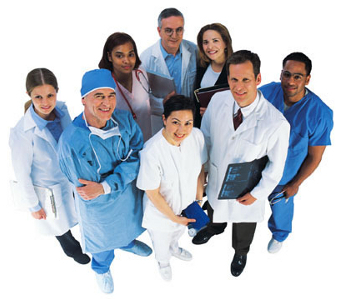 Team Medicine: a provider, a nurse, a social worker and tele-monitoring working in tandem to deliver patient care, lower costs, and advance population health. Remember that old adage, “It takes a village to raise a child.” Well, it takes a team to properly care for a patient.

For outcome based reimbursement to properly work, three things must work together:

Multiple physicians go with an increasingly chronically ill but longer living patient base. Nephrologists, gastroenterologist, neurologists, pathologists, radiologists, to name a few, must all have care coordinated and over-seen by primary care physician. Team care is not a new term. Most healthcare professionals recognize that each specialty must contribute to a patients well-being. The difference is that the team must work in coordination with each other and that care must be over-seen and documented. The fine print says, if done properly, it will cost less. But the cost of the team may be initially expensive. Not to mention the technology.

I once worked at a clinic whose rule was, a patient must see at least 3 specialists before he can be cured. Of course that was a joke. But it did seem like patients often saw at least 3 specialists during the course of their treatment. But the good almost futuristic feature of the clinic was that they were on an electronic medical record long before it became mandatory. It took years to get full compliance and did indeed completely dismantle the cost of the very manual medical records department and all the cost associated with it. Most of which was human cost. But the coordination of care between departments was awesome. A provider did not have to wait for a manual chart to be found and delivered prior to treating a patient. All the medical records were stored on the computer. This accomplished some things besides cost-reduction (in fact the cost has probably exceeded what medical records cost in its heyday).